the heritage of the Jewish People in North Carolina

The Jewish Heritage Foundation of North Carolina is the only statewide independent organization dedicated to collect, preserve and present the history of the Jewish people of our State. To serve our mission we honor our history, celebrate our culture, and connect our communities.

We seek to collect artifacts that recount the story of the Jewish people in North Carolina, present programs that educate and showcase the richness of Jewish life, and serve as a resource to connect and enhance our diverse Jewish communities as well as promote a familiarity with the culture and lifestyle of Jews to the general public.

Use our custom map search to connect with Jewish life in North Carolina. 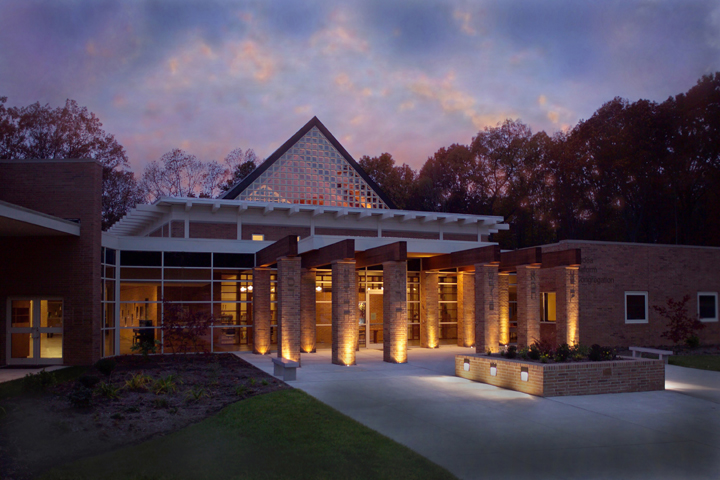 Synagogues and Temples in North Carolina

Learn about the Jewish Synagogues & Temples in NC with an interactive map and directions. 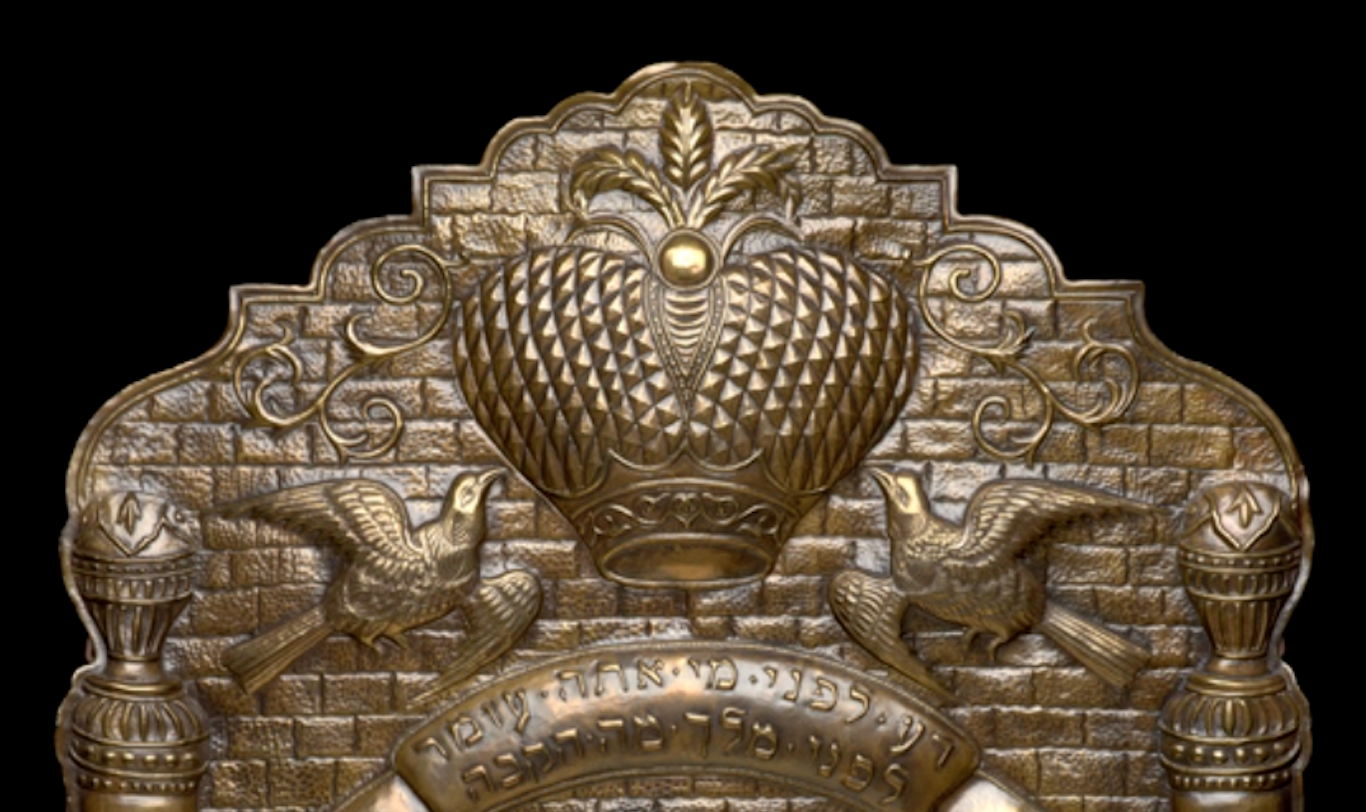 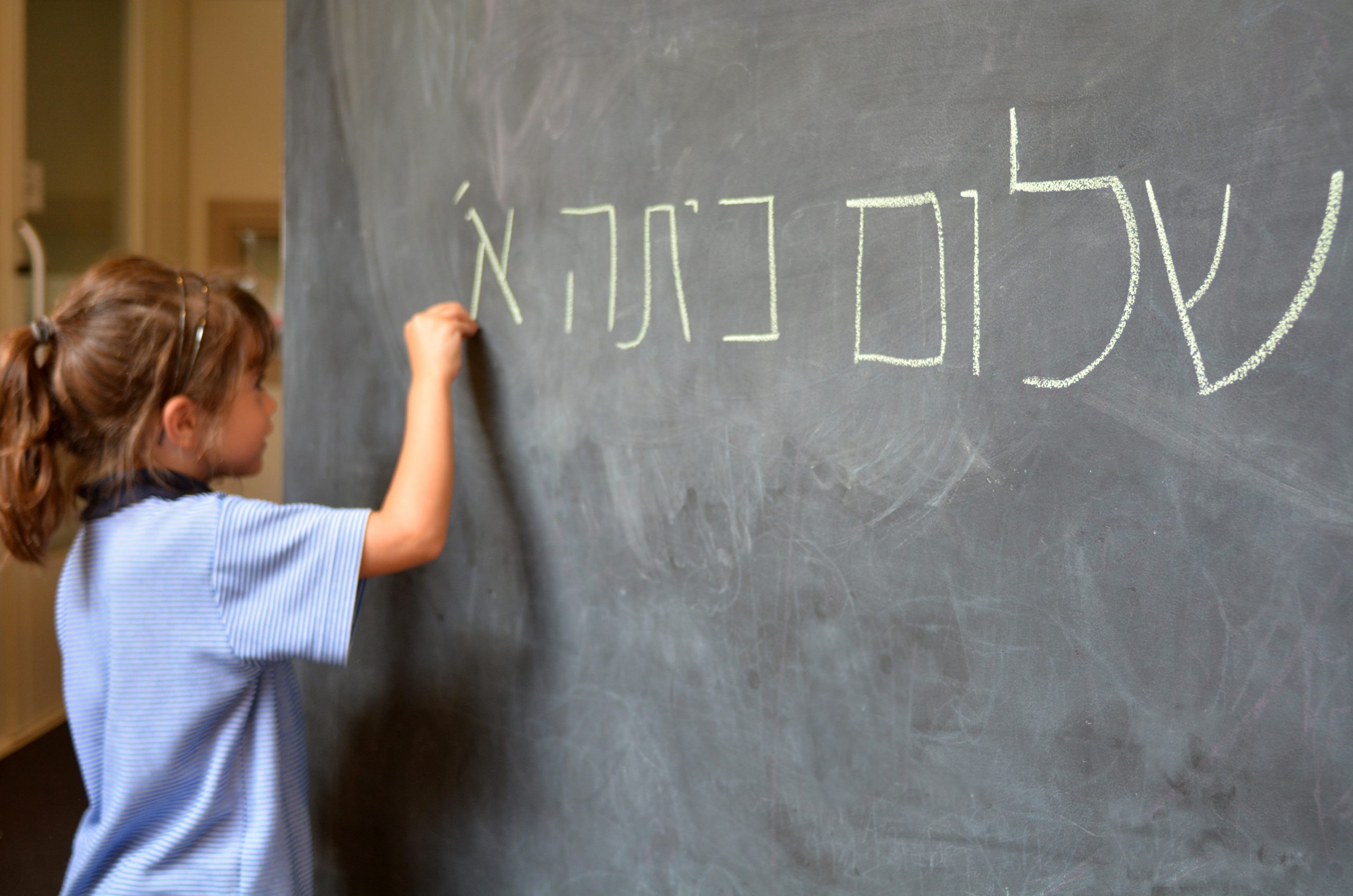 Did you know there are many Jewish Day Schools, High Schools and College Judaica programs in NC? 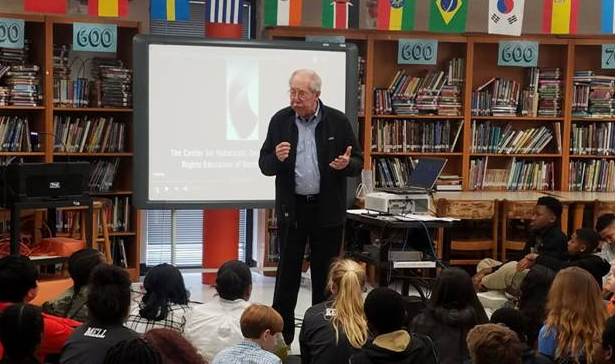 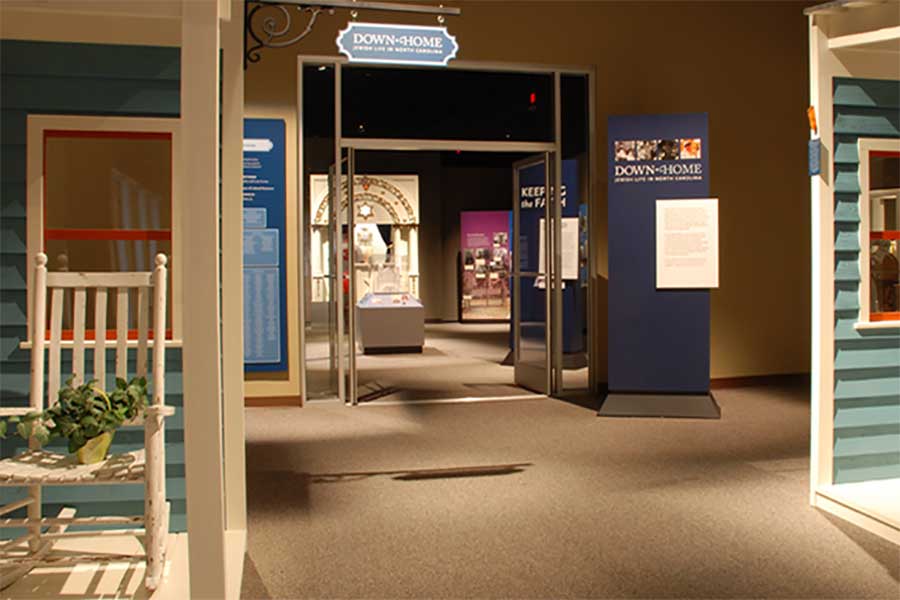 The ``Down Home`` program at Duke is one of many Jewish Cultural experiences in North Carolina. 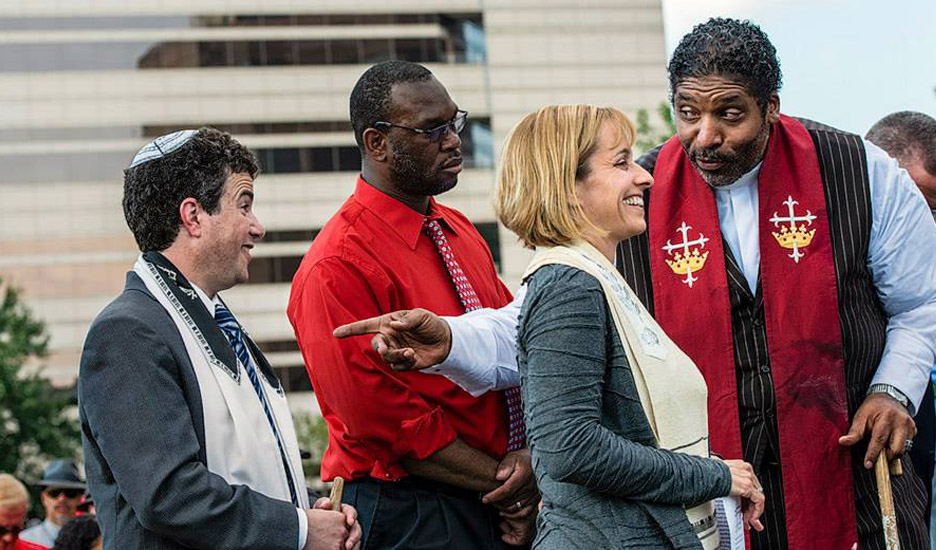 Confederate memorials, not a Jewish problem?

As Confederate statues fall in battle, North Carolina Jews may feel that we are watching someone else’s war.  After all, most Jews arrived in America decades after the Civil War, and few have deep or lengthy southern roots.

In downtown Charlotte the focus is a stone memorial erected with Jewish patronage that honors Judah Benjamin, who served the Confederacy as secretaries of war and state.

Raised in Fayetteville. Benjamin was once a source of local Jewish pride.  In 1865 when Benjamin fled Richmond, he found haven at the home of Charlotte merchant Abram and Barbara Weill.  In 1948 the United Daughters of the Confederacy (UDC) approached Charlotte’s Temple Israel and Temple Beth El to raise funds for a Benjamin monument at the Weill homesite.  The stone slab’s inscription states that the two Temples presented the memorial to “honor” Benjamin and as a “gift” to the UDC.  According to journalist Harry Golden—who 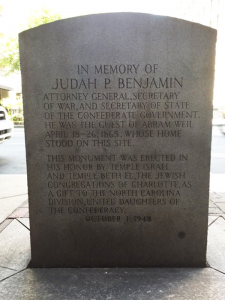 gives various accounts of the story—a Red-baiting New Yorker warned the local UDC to avoid Jews, but the memorial was erected with Jewish support nonetheless.

More recently, Rabbi Judith Schindler of Temple Beth El has used the monument as a setting to educate students on the Jewish role in the Confederacy. Rather than as a statesman, Benjamin is now recalled as a Louisiana planter who owned 140 slaves.   In 2017 the Temple board voted unanimously to recommend that the city council remove or relocate the memorial.  Rabbis Asher Knight of Beth El and Howard Siegel of Temple Israel, along with their congregational presidents, have written a letter, printed in the Charlotte Observer, calling for its removal.

Its stone chipped, the Benjamin monument now has “BLM” painted across its inscription.

Asheville’s Jewish community has a Confederate legacy in the obelisk erected in 1898 in Pack Square to honor Civil War governor and U. S. Senator Zebulon Vance.   For Jews Vance was beloved for his philo-Semitic speech “The Scattered Nation,” a paean to Jews that he delivered hundreds of times.  Vance described Jews as “our wondrous kinsmen” and “spiritual fathers.”  For more than a century Jews have honored Vance, from the 1890s when they presented him with a gold-headed cane to the 1990s when they republished “The Scattered Nation.”

Annually, on Vance’s birthday B’nai B’rith–later joining with the United Daughters of the Confederacy– had placed a wreath at the obelisk. 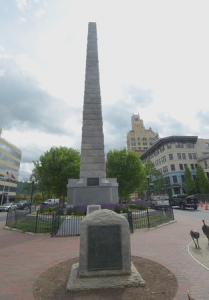 New York philanthropist Nathan Straus endowed the annual wreath laying and paid for an iron fence around the monument.  Jews underwrote a UDC bronze plaque placed on the monument in 1938 and contributed to the obelisk’s restoration in the 1990s, B’nai B’rith also sponsored a monument to Vance at the Calvary Episcopal Church in Fletcher as a contribution to a memorial garden of distinguished southerners.  Rabbi Stephen S. Wise spoke at the 1926 dedication.

Once held as a model of tolerance for his defense of Jews, Vance is now disparaged as a slaveholder and white supremacist.  Today, “The Scattered Nation” is an unreadable piece of racial gibberish, despite its putative praise of Jews.  Now, Asheville—under Mayor Esther Manheimer–and Buncombe County have appointed a joint task force to consider removing or repurposing the obelisk.  Local Jews are forming a committee to seek ways to ally themselves with the African-American community.  JHNC board member Sharon Fahrer has been tasked to explain the Jewish role in Vance memorialization.

Go to Top
By visiting JewishNC.org, you are accepting the practices described in our privacy policy. OK