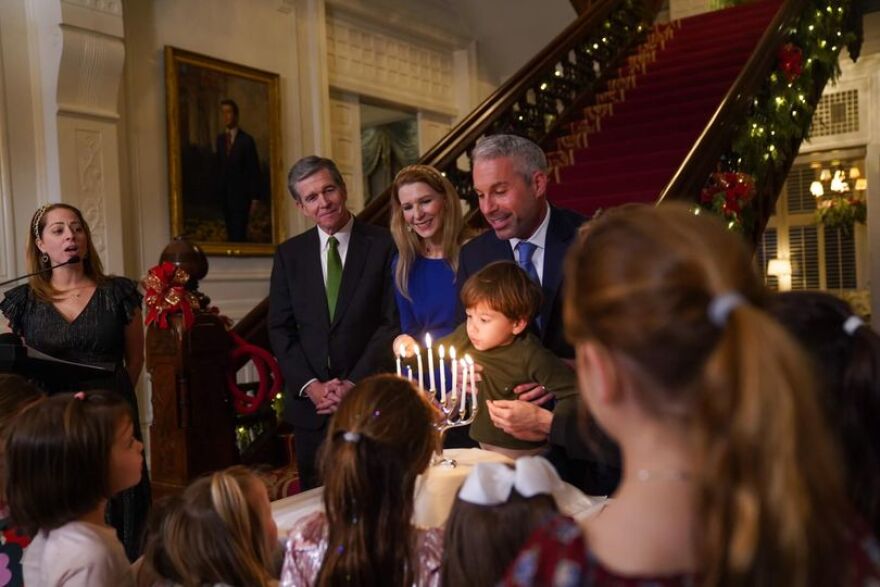 Photo Credit: Office of the Governor

Governor Roy Cooper presides at the lighting of a Hanukkiah on December 14.

When old timers would bring to Jewish Heritage North Carolina vintage letters and photographs, often we would find recollections of Purim or Passover.  Hanukkah not so much.  Many families cherished photographs of a seder with the elders at the end of a long table with younger members seated at the sides, often holding small children. Purim photos include playbills and memories of spiels and photos of costume parties.  Photographs of Hanukkah celebrations tend to be more recent, invariably after World War II. Children are front and center.

Hanukkah historically was a minor holiday on the Jewish ritual calendar.  The rabbis did not see fit to include the two Books of the Maccabees in the biblical canon.  Historian Diane Ashton in Hanukkah in America (2013) describes a distinctly American holiday, its significance starting to rise in the middle of the nineteenth century as Jews entered the middle class.  It became a family event observed in the home with candle lighting, games, songs, and gift giving.  The photographs that we see now often feature children lighting their lamps.

In short, Hanukkah has emerged to become a “Jewish Christmas” given the proximity of the holidays on the calendar.  The Raleigh News & Observer caught that contemporary spirit in reporting, “Hanukkah is one of the most widely observed Jewish holidays. It overlaps with the Christmas season this year.”   And the holiday has certainly become commercialized on the Christmas model.  On our street a front lawn features an inflated Happy Hanukkah candelabra.  Diane Ashton observed Jews who decorate their doors in Hanukkah gift wrap.  Look at the Hanukkiot now available at Judaica stores that feature toys or sporting gear as candleholders.  Gift giving is very much a part of the observance.

Rather than a struggle against assimilation, Hanukkah has been refitted to the American narrative of a small, brave nation overthrowing a tyrannical power in a fight for freedom.  We now have public Hanukkah lightings with the Jewish lamp placed next to the communal Christmas tree. It’s a civic event reaching into the White House. One highlight came in 2015 when President Barack Obama held a candle lighting ceremony before a tree with Israeli President Reuben Rivlin lighting a Hanukkiah from the North Carolina Museum of Art’s Judaic Art Gallery.  The lamp itself traces to Ze’ev Raban of Jerusalem’s Bezalel Workshop, dating to the late 1920s.

This year Governor Roy Cooper hosted a pre-holiday lighting on December 14 at the Executive Mansion.  Prior to the ceremony the Governor, joined by Attorney General Roy Stein, among others, met with members of the North Carolina Association of Jewish Clergy (NCAJC) to discuss issues of “concern” to the community.  Foremost among them was the recent spike in anti-Semitic activity and security for Jews and Jewish institutions.  Governor Cooper noted that Hanukkah is “a wonderful chance to gather and reflect on the holiday’s valuable lessons, including the courage to fight for what’s right so that light can triumph over darkness.”  Rabbi Judy Schindler of Charlotte, NCAJC cochair, emphasized the Americanism theme: “For the Jewish community, North Carolina is home. A home where love, justice and religious freedom reign.”  Rabbi Solomon of Raleigh, also a NCAJC cochair, added, that the lamp was “more than just a Jewish symbol. Hanukkah is about religious freedom.”