In this article from Charlotte NPR by Tom Bullock, the digital “Down Home” exhibit is featured.  View the original article at: http://wfae.org/post/harry-golden-takes-seersuckered-south 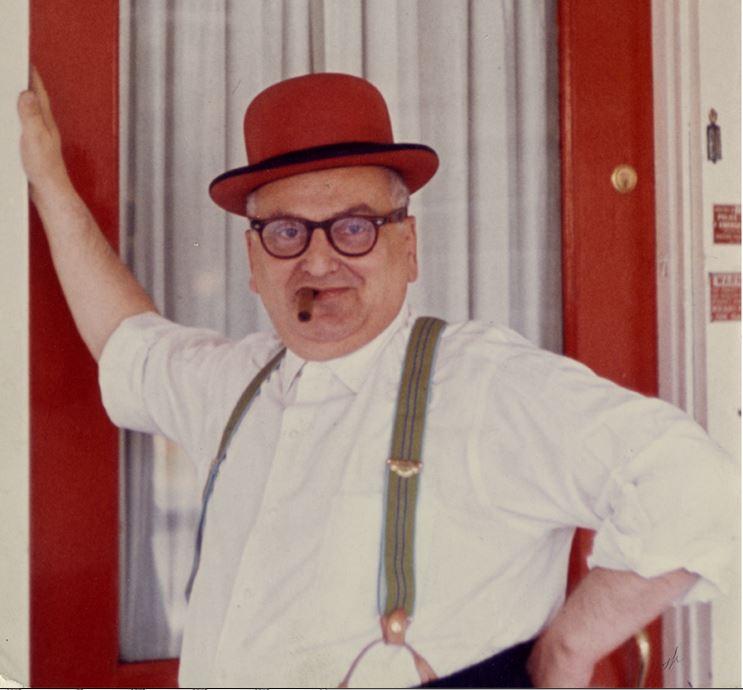 Long before Charlotte had its crown of skyscrapers, rings of highways and cape of sprawling suburbs, there were two trails that crossed each other in a relatively flat section of piedmont.

The path that went east-to-west would eventually be called Trade Street – fitting since it originally connected two rivers.

The North-South trail would turn into what we now know as Tryon Street. And that trail was part of the key path for settlers, a path then known as The Great Wagon Road.

Today, we begin a new series, Along The Great Wagon Road: Occasional Detours Through History.

Our first detour takes us to the corner of 7th and Hawthorne in Charlotte’s Elizabeth neighborhood. And the life of a man who fought bigotry with a biting sense of humor.

Between the sidewalk and the green picket line of trees where Independence park brushes the roadway, there’s a new historical marker.  So new the silver paint reflects the sun to such an extent at the right time of day, you have to squint to read the text. Harry Golden, 1902 to 1981. Journalist, humorist and civil rights advocate. He lived one block northeast.

To understand Harry Golden’s role in our collective history you need to go back to 1944.   It’s the year the ball point pen was invented, there was D-Day of course, and Bing Crosby was crooning out hits like “Swinging on a Star.”

1944 was also the year Golden, a short, rotund, bespectacled man decided he was going to go out on his own, says Tom Hanchett, “He was someone who loved his appetites, he always had a cigar in his mouth he loved his bourbon.”

And he loved the written word.  Golden once called the English sentence the most precious thing in the world.

So Golden decided to start his own newspaper.  Golden was an immigrant, born in the Ukraine and raised on the Lower East Side of Manhattan. And Golden was Jewish. The masthead of his new monthly paper included images of the Torah and a menorah.  Golden named the paper the Carolina Israelite. But as Golden told an interviewer, the newspaper’s name was a bit of a rouse. “I called it the Carolina Israelite to throw the folks off the track for a while. By the time they woke up and realized it wasn’t what they thought it was it was too late for them to do anything really.”

They were the white establishment.

And for decades, the Carolina Israelite, penned solely by Harry Golden, questioned everything that was the seersuckered, segregated South.

“What he had done was brilliant.” says historian Tom Hanchett, “He used humor to poke holes in the pretentiousness of the white South. The traditions, the things that must not change. Segregation.”

In one article, Golden noted black nannies could only attend segregated theaters in the company of white children. So Golden suggested we could desegregate all theaters simply by handing out white baby dolls to any African-American who wanted to see a movie.

As for desegregating schools and lunch counters? Golden had a solution for that, too:

The white and the Negro stand at the same grocery and supermarket counters. Deposit money at the same bank tellers window. Pay phone and light bills to the same clerk, walk through the same dime and department stores. It is only when the Negro sits that the fur begins to fly. So now here is the “Golden Vertical Negro Plan.” All the North Carolina legislature needs to do is pass one small amendment that would only provide desks in all public schools in our state.  No seats. The desks should be the old fashioned standing up jobs like the old bookkeeping desks. Since no one in the South pays the slightest attention to the vertical Negro, this would completely solve our problems.

It was essays like this that brought Golden and the Carolina Israelite to prominence.

At its height in the late 50’s and early 60’s the newspaper had some 14,000 subscribers and reached well beyond the Carolinas.

In his Letter from Birmingham Jail, Martin Luther King, Jr., wrote that Harry Golden, among others,  wrote about “our struggle in eloquent and prophetic terms.”

And Golden did more than write. Tom Hanchett says Golden’s house quickly became the place to talk, and to change minds. “People who were among the leadership of the NAACP, African American people of importance might rub shoulders there, might talk freely with people from the fancy neighborhood of Meyers Park. And having those informal communications channels may have been as important as what Harry did as a journalist.”

Golden’s essays were eventually published in a book. Only In America was an instant best seller.

In 1958 Golden told Life Magazine he, “needed success like he needed a hole in the head.” Literally that’s the quote. What he needed, he said, “was obscurity and just enough to pay the phone bill.”

Turns out, Golden had a secret that came to light earlier that year.  His real name was Harry Goldhurst and in 1929 he had been convicted of mail fraud for a stock scheme. He served time in a federal prison.

Asked how he got away with his stinging social commentary, Golden said “No Southerner takes me – a Jew, a Yankee and a radical seriously.”

After his past came to light, Golden was swamped, not with angry phone calls, but with offers to speak.  Tom Hanchett says Golden’s adopted home town welcomed him, to a point. “Harry, Harry never stopped being an outsider. But Charlotte embraced him none the less as someone who spoke truth, and spoke honestly and passionately.”

In 1968, Golden closed the Israelite down. But he kept busy writing books. And he took those offers to be a visiting lecturer. In 1969 Golden told UCLA students he had even talked to the Charlotte Chapter of the Daughters of the American Revolution. This civil rights advocate said he toned that speech down a bit.

“To them I gave a speech about the value of the fluoridation of water.” he told the crowd.  And then went to say all his speeches began with a dinner. “This is something the Jews invented. No eatin’ no meetin’. While the Anglo-Saxons were still roaming the forests of Great Britain, painting their bodies blue and eating wild berries, we Jews already had diabetes.”

The speeches, essays, meetings and meals at Golden’s house continued for decades. Everyone was welcome. But for a young Tom Hanchett, new to Charlotte at the time, the prospect of meeting Harry Golden was a bit overwhelming. “When I came to Charlotte in 1981, I was a shy young person and I didn’t think I could go and talk to an important person. And I missed Harry Golden.”

In October of that year Harry Golden passed. His book, Only in America, remains in print.

Read more about Harry Golden and see video at the Duke Center for Jewish Studies’ website. 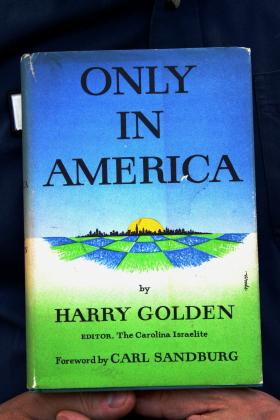