by Leonard Rogoff; 422 pages, published in association with JHFNC by the University of North Carolina Press, 2010.

A sweeping chronicle of Jewish life in the Tar Heel State from colonial times to the present, this beautifully illustrated volume from the University of North Carolina Press incorporates oral histories, historical documents, and profiles of fascinating individuals. The first comprehensive social history of its kind, “Down Home: Jewish Life in North Carolina” demonstrates how North Carolina Jews acculturated to the South while maintaining their traditional religion, culture, and community.  Present since 1585, Jews have loomed larger in the minds of North Carolinians than their numbers would suggest.

Setting the North Carolina story in larger southern, American, and trans-national contexts, author Leonard Rogoff explores how North Carolina Jews differed.  Settling in small towns rather than in its large cities, Jews have made a disproportionate contribution in building the New South and the Sunbelt. Jews have been at the forefront of a changing South, Rogoff argues, and their experiences challenge stereotypes of a society that was agrarian and Protestant. 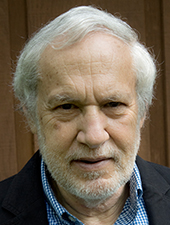 Dr. Leonard Rogoff, historian of Jewish Heritage North Carolina, has written and lectured extensively on the Jewish South. His essays have appeared in numerous journals and anthologies. He is past president of the Southern Jewish Historical Society and recipient of its Lifetime Achievement Award.  He conceived, researched, and wrote text for the exhibit “Migrations: the Jewish Settlers of Eastern North Carolina” and directed a multimedia project, “Down Home: Jewish Life in North Carolina.”  His books include Homelands: Southern Jewish Identity in Durham and Chapel Hill, North Carolina (2000);  A History of Temple Emanu-El, Weldon, North Carolina: An Extended Family( 2007);   and Gertrude Weil: Jewish Progressive in the New South (2017), winner of the Ragan Old North State Award for Nonfiction.

Down Home is the best and most comprehensive history of Jews in any one of the fifty states. Lively, well researched, and beautifully illustrated, it is a warts-and-all history that properly integrates 425 years of Jewish life in North Carolina with larger trends in American and Southern Jewish life. The volume sets a new standard for state-wide histories of American Jews, and sheds new light on Southern Jewry, Black-Jewish relations, and the American Jewish experience as a whole.